It’s now 21 years since the wicked witch of the west resigned from power, 21 years waiting for this odious, obnoxious, repulsive, hateful human being to die, oh….. In case your not sure of who I’m talking about, well…… It’s Margaret Thatcher, there are not enough adjectives in the English language to describe my hatred of this woman.

What has she done to deserve this, where do I start….. With the closure of the mining industry or the closure of the steel industry, or the introduction of the poll tax, allowing 3+ million people to be on the dole, the decimation of the NHS, I could go on but, I’ll get to more of them later.

We should have got an idea of how obnoxious this woman was when she was Secretary Of State for Education And Science in 1970 and decided to cut the schools budgets resulting in the children not receiving free school milk, and earning her the nickname ” Margaret Thatcher, milk snatcher” the first attack on the working class, and certainly not the last.

She became Prime Minister on 4th May 1979, then piece by piece she started to destroy the working class, the mining industry, the steel industry, and the Liverpool dockers were all attacked by her and the Conservatives, leading to major strike action, which ultimately resulted in the closure of numerous mines and steel plants and the decimation of communities that depended on those industries, she did not care about this because the banking and financial sector were doing very well, this is the introduction of the yuppie scum that have made the era of the eighties their own, these bastards bought up run down properties in working class areas renovated them, moved in and out priced the local inhabitants leaving them no option but to move away from their areas, this resulted in certain parts of London commanding prices of millions of pounds for properties that are worth, in reality, a fraction of the cost, resulting in the formation of Class War, a reactionary group led by Anarchist Ian Bone. 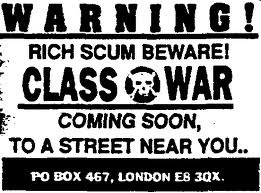 Class War led the attack on the yuppies by graffiti attacks on properties within the new yuppie areas and also attacks on the properties themselves and vehicles, Porches were not safe. It was recorded that in the mid eighties that Class War had in excess of 50,000 “soldiers” who were ready to manoeuvre at any time. Class War’s tabloid paper sold in newsagents around the country and most major cities had their own local branch, Thatcher and her Tory party had started a mini civil war, and we weren’t finished. Riots were common place, the biggest of these in Brixton, Toxteth, Southhall and Handsworth, although smaller skirmishes broke out in Leeds, Nottingham, Bristol, Southampton and Edinburgh, the hatred was spreading. On the 12th October 1984, the Provisional IRA set off a bomb in a hotel in Brighton on the eve of the Tory Party conference, although she was shaken the bitch survived, 5 Tory Party members were killed and a number injured, but the main objective failed.

The poll tax was the last straw for the public, this was first introduced in Scotland on the 1st April 1989, and the Scots quickly rose up against it, with a “can pay, won’t pay” campaign and a bash the bailiff mentality, the reason for this anger north of the border was it was only introduced in Scotland, and not England, we were not going to be guinea pigs for Thatcher and her cronies, and put up a reasonable fight, but only when she decided to introduce the tax south of the border did the fight really begin. On the 31st March 1990, 200,000 people marched through London in protest to the illegal tax, it set off at 12:00am by 1:30pm the police, overwhelmed by the numbers, moved the protestors quickly towards Trafalgar Square, but as the numbers swelled, Trafalgar Square was nearing capacity and this caused a bottleneck which meant that protesters were gathering outside Whitehall, the sight of Downing Street was all the protestors required, a few hardcore Anarchists took their chance and started splitting from the main protest to start their own protest, and the full blown riot ensued, named “The Battle of Trafalger” shops along Chelsea were vandalised, the obligatory attack on McDonalds burger chain, and South Africa House was petrol bombed for good measure, the police were given the runaround until 3:00am when the rioters went home. This was ultimately then downfall of Thatcher, who resigned in November 1990, 11 years after coming into power, 11 years of misery, poverty, and social deprivation.

So why do I hate Thatcher so much, well from the above it’s pretty obvious, but it’s more personal, you see I was a steel worker, my steel plant was the first to close in North Lanarkshire, I had already been on strike on two occasions to try and save our jobs, to no avail, the plant still closed. But away from that, I also felt compassion for my comrades in the mining industry who were going through the same as we were. She killed working class communities by the job losses in those areas, she killed pensioners who could not afford to heat their homes properly, or afford food, she killed young soldiers needlessly to fuel her power mad war in the Falklands, she gave no future to the youth leaving schools with no hope of employment, she left the country with over 3 million on the dole. Her decimation of available council houses to rent by her sell off, left millions without a hope of having a home to live in, unless they could afford to buy, even then her yuppie scum had forced the price of a descent house out of the grasp of normal folk. She widened the gap in the class structure, the rich got even richer and the poor got even poorer, 20 years on and the gap has not shortened, it is as bad as it was. Don’t get me wrong, the Labour party who took over from the Tories have done as bad a job, if not worse considering they should be looking after their own as it were, but the scale of depravation the Tory party put the country in was disgraceful.

It has been suggested that we should have a state funeral for Thatcher on her death, well not in my name, or, with my tax pounds, this evil octogenarian should be left to rot in the gutter with the rest of the rubbish, but, on her death their will be parties up and down the country I’m sure, the main one being organised by Class War, the first Saturday after her demise, I also know that the Glasgow Anarchists have organised a get together in Glasgow Green. Let’s hope we don’t have to wait too long for these celebrations to rejoice in her shrugging off this mortal coil, we will be rid of the most evil person since Adolf Hitler, a truly obnoxious creature.

Trafalgar Square…… I’ll be there !