UK Culture Secretary Jeremy Hunt has stated today that he wants stricter regulations on web piracy. He wants Google to remove links to pirate sites and companies to stop advertising on pirate sites. Two words for you Jeremy….. “Fuck” and “You”, get the message. 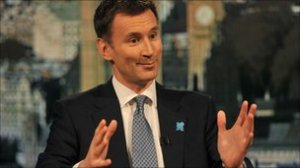 Google have responded saying it was unlikely that this would happen and followed up with the following statement:

“Without a court order, any copyright owner can already use our removals process to inform us of copyright infringing content and have it removed from Google Search,”

Good on you Google, The internet is the last bastion of free speech and it should remain that way. I would challenge anyone in this day and age that has not illegally downloaded one piece of software, music, books or movies or received a copy CD/DVD of something pirated. Personally I am into music and I love living in a world where I can instantly listen to any song that pops into my head. I love not having to buy albums only to discover the one good song I heard is the only good thing on the record. I love making mixes of MP3s and being able to add or delete tracks with just a few clicks on my playlists.

I am an unapologetic music pirate. I never need to pay for music again. The Clash on Broadway triple album? Why bother buying it if I can just type in the name of any of their songs and have it in a few minutes? If I want a CD, I’ll buy a burner and make it. I am always asked the following questions when the subject of piracy come up

The answer to all the above questions is

like most criminals with a conscience, I’ve found a way to rationalise my transgression.

When we think of musicians, we tend to think of big successful stars. You can become absurdly wealthy with precious little talent in the music industry, just look at the Pop Idol and X-factor series, I rest my case!  but chances are, even if you are very talented, you won’t. The other picture of a musician, the struggling artist who eventually grows up and has to get a real job, is much more common.

It’s hard to make a living making music. In our society, all industries, even those whose purpose is nominally artistic, exist solely for the sake of turning a profit. Because it’s expensive to market artists, and assuming there is a more or less fixed amount of money that consumers will spend on music, it makes sense for studios to try to make as much money as possible from as few musicians as possible. Fewer musicians also make it easier for industry executives to control both the money and the fans by narrowing their focus.

Thus the music industry, like an organism, has evolved certain adaptations most useful for its survival and prosperity. Here are a few:

The effect of these facts on musicians (taken as a whole and averaged out) is obvious: it keeps money out of their hands. While a few artists become very wealthy and a somewhat larger group is able to make a living, the money made in the industry is distributed very unevenly–and that distribution is certainly not commensurate with talent. What’s more, you end up with artists who act like Metallica. The band, whose music ostensibly represents a rebellion against mainstream values, have endorsed corporatism in its most distasteful form by taking legal action against Napster. It presented the company with 60,000 pages of Napster users who had Metallica songs available for download. This bold betrayal of its fans shows that the band does ascribe to that most mainstream of beliefs: money talks.

Unfortunately, because only the popular, rich groups like Metallica are covered by the press, it’s easy to forget about the rest of the music industry. It’s also easy to forget that the most money in music isn’t made by musicians, but by industry executives. The result? The studio system doesn’t benefit most musicians; it hurts them. By controlling absolutely the flow of money generated by music, a few huge media companies end up making it very difficult to make a living making music. Despite what the mansion-dwelling members of Metallica think, the current system is bad for musicians.

It’s fairly easy to imagine a world like that. Music would be distributed by musicians themselves at little or no cost, with most revenue coming from performing. (Don’t forget, there was a time not all that long ago when the technology to record sound didn’t exist, and performing was virtually the only source of income for musicians.) People would have access to a wide selection of music and be able to learn about new music easily driving bad music out of business. Sure, 13-year-old girls might have trouble picking objects of fantasy without the guidance of the record industry, but sacrifices must be made.

But what would it take to effect such a radical change? The current music studios wield enormous muscle, and dismantling that industry would obviously take a revolution of sorts, an occurrence so profound that it would forever change the way we think about making money from music.

Napster before and now torrent and P2P file sharing groups just might be that revolution, iTunes, can be used for the corporate whores who wish world music domination.

It’s likely that people haven’t realized just what a fundamental change to the music world this technology represents. It is now possible to acquire instantly virtually any song ever performed. (At this point it’s easier to find Boyzone than Big Audio Dynamite, but given time, the system will asymptotically approach completeness.) The sound is CD-quality and doesn’t degrade with further copying. Now that people have gained this ability, they will never give it up, no matter what Metallica, Dr. Dre, or the Recording Industry Associations around the globe would like to think. Even after they managed to foil Napster, a private company, there are already open-source, decentralized alternatives to Napster that provide no easy target for prosecution, recent court appearances from Swedish web masters The Pirate Bay also threw a big two fingers up  to the music industry and to this day have still refused to pay the $2,000,000 fine imposed on them and have never closed their site down.

Such power in the hands of users is the natural result of Internet evolution. The ability to network computers across the globe has an obvious conclusion: all information ever created available to everyone, everywhere, for free.

Eventually a free exchange of music will be so common that the idea of calling it stealing will be absurd. Intellectual property and copyright will take on new meaning–or cease to exist. And it won’t just benefit the consumers of music, but also the creators. Yes, there will be fewer mega rich stars. But artists will no longer be held hostage by a greedy industry that cares only about wringing as much money from them as possible.

I will also add that while I do download music, when I find something I like I will support that artist by buying their wares and go to the concerts and occasionally buy a t-shirt, what I’m getting at is most illegal downloaders actually contribute to the industry that they are supposed to be stealing from, a study has proved that illegal downloaders spend more on average per year than people who say they don’t illegally download, as reported in the Independent on 1st November 2009:

That study was prompted by Peter mandelson, then Secretary of State for Business, who planned to:

“crack down on illegal downloaders by threatening to cut their internet connections with a “three strikes and you’re out” rule.”

Well, Peter’s plans worked out then, as more pirate sites have appeared on line since then. Downloading is not killing the respective industries, capitalism and greed are to blame, eradicate this and we will eradicate the need to illegally download.

Maybe I’m only justifying my theft. But I feel OK about it.