Quite a straight forward post today, and not one of my normal political rants, today I went to my first Apple store opening this morning in Braehead, the only way I can describe it is surreal. 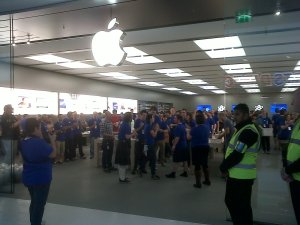 Getting Ready To Meet The Crowd

When I arrived There was probably about 100 folk in front of me, iPhones, iPad 2’s and other brands of phones all recording and taking photo’s of this extraordinary event. I had seen other Apple store opening events on the web and they seemed to capture the excitement of the crowd, who, being Apple nerds were all going wild at the prospect of a new store to frequent, this was no different. Ten minutes before the store opened, there were loud cheers and screams from the Apple store workers going through some sort of Apple corporate mantra to psych themselves up, it looked very strange but strangely alluring, the doors opened and as the first few customers ran in, they ran a gauntlet of Apple workers all cheering and high five-ing each customer as they ran through, some embraced the ceremony while others looked sheepish as they walked through, me being of the sheepish variety. Being a bit of a Mac nerd myself, these blogs are written on either my 27″ iMac, Macbook or iPad, I also listen to my music on the good old iPod, so having visited Apple stores in the past it I was interested to see what a store opening was like, also the lure of a free T-Shirt also caught my attention. To round off, this was quite an enjoyable experience if somewhat surreal, and now I have an Apple store just over a mile away from where I live, I’m sure the geniuses will get to know me as I pester them for advice in the coming months.

‘Till the next time……