“The anarchist revolution that we want transcends the interests of a single class, it envisages the liberation of all humanity which is at present enslaved, either economically, politically, or morally.” Errico Malatesta. 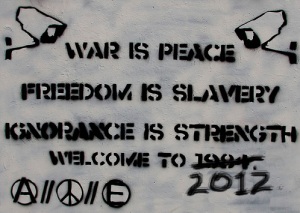 As an Anarchist, I believe that we, as individuals, have the right to make our own. decisions in life, and that choice is essential to any “real” freedom. Anarchists reject all forms of government on the grounds that a ‘governed’ society is a society in chains. It is inevitable that socialist ideas of organisation and centralisation should cause friction, since both are a form of control, and control, to an anarchist, is slavery.

The major enemy to anarchists are politicians, they are the oppressors, they bind us to laws that benefit the few and control the many. Anarchy in it’s true form should not be confused with the chaotic scenario that many people associate with the belief. Anarchists do believe in law and order, but not man made laws, the moral laws of what is right and wrong, for example, it is morally wrong to steal from your fellow man, it’s wrong to kill, it’s morally wrong to let your fellow man starve, or be without a decent home, these things seem to be left out of our man made laws, they tell you it’s wrong to kill, but wars initiated in the name of god and country are OK, totally hypocritical. Yes there are bad people out there and we need to formulate ideas in how to deal with them but when greed and hatred, based on beliefs, class, colour and creed is taken out of the equation and everyones needs are catered for, most of today’s society’s crime would be eradicated, or at least dramatically reduced.

Politicians in my opinion have no moral fibre, they choose a career in which their decisions affect millions of people, some of whom cannot make decisions for themselves, for one reason or another, but, these details are not important at this moment. We first hear of these politicians when they are looking for support to get elected, manifesto’s littered with false promises of creating a utopia for all of us to revel in, then once elected the deception begins. The promises are broken, as if they never existed, it seems, the corruption sets in, money for questions, excessive expense accounts are created and public deception begins, of course by deception I do mean lies ! They elevate themselves from being initially public servants to minor “z list” celebrities by involving themselves in meaningless game shows, chat shows and any other forms of public media that will have them, take for example the ridiculous antics of George Galloway on Big Brother, acting like a complete fool, purring like a kitten, then he has the audacity to expect us to take him seriously in Parliament after this, not being able to understand why we ridicule him. We now have the idiotic Lembit Opik, of the Liberal Democrats, once seen flouncing around with his then “cheeky girl” fiancé, not knowing whether to be a politician or an entertainer. Now, I do not advocate that no-one should not have fun or “have a laugh” but, and here’s the big but, if they want to run people’s lives and make massive decisions for a countries well being then they should restrict these antics to the privacy of their own homes or private affairs, and not by inflicting their wacky personalities on the unsuspecting public. This is one of the factors that makes me wonder how sincere their objectives are when they are engaged in their day jobs, I do believe that I’m not the only one who thinks this way either.

The politicians can award themselves vast pay rises, far above the rate of inflation, whilst us commoners have to beg to keep ourselves alive. Don’t these people realise that they effectively work for us, if it weren’t for us they would not be in the privileged position they are.

They also control us with CCTV, Britain has more cameras than any other country in Europe, according to the latest studies, Britain has a staggering 4.2million CCTV cameras – one for every 14 people in the country – and 20 per cent of cameras globally. It has been calculated that each person is caught on camera an average of 300 times daily. Big brother is watching you ! The Orwellian prediction is coming true, couple CCTV with the proposed introduction of ID cards, DNA libraries and the circle will be complete. We will have nowhere to hide, we will cease to be individuals, just a number. The cost of this to you and me….? An estimated £500m of public money has been spent on installing CCTV in the last decade. £500m … makes you think…. how many houses that would have built to house the thousands of homeless, how many mouths would that feed, but then, keeping the publics interest at heart does not feed the capitalist mouth now does it ? It is not just CCTV that they can monitor our movements with there is a vast list of tools and systems that we take for granted in our everyday use:

The list above is by no means complete it’s just a sample of what can and is used to monitor our movements, as you can see most of these items will be used by us numerous times a day, and every time we use it, a small flag is raised in our profile. Scared ? You fucking should be ! These massive files are not only used to supervise our movements by the powers that be, they are used by the retail industry, either by using your store card, or sold on by a third party, yeah, we have the data protection act, but, and it’s a huge but, how many of us know how to go about retrieving this information ?. Do you ?

They tell us that all this surveillance is to protect us. I say it’ there to watch us, control us, keep us all in line, “watch your step sonny, keep in line, do as your told” if this expensive network of cameras are there to protect us then why has crime not been eradicated yet ? Crime has risen and fallen with no particular bias on CCTV, So if it’ not there to protect us, and it’s not stopping crime, why are more and more cameras being installed every day ? Another question this raises is who exactly is watching us ? Who is actually being paid to scrutinise our every move? And what qualifies them to engage in this human peep show ?

Orwell wrote about Big Brother watching us, with more and more private organisations using this type of surveillance it’s more like Big Brother, his little twin brothers, his sister, Mum, Dad and the whole fucking family are all in on the act.

Anarchy and anarchism will more than likely never be adopted, but we all must have something to believe in, and for me an anarchistic lifestyle suits my vision of what the world should be, no bigotry, no hatred, no complicated laws, no religion, no planetary borders, no rulers, we are all the same underneath and when we can change our outward appearance to reflect our inner selfs then we are halfway to having a world worth living in.