Today is the twenty fourth anniversary of the Hillsborough disaster a shocking event  that took the lives of 96 innocent football supporters from Liverpool, at the heart of this disaster was some of the most shocking reporting and lies ever printed by a newspaper, The Sun and it’s editor scumbag Kelvin MacKenzie, printing lies that supporters picked the pockets of the dying and injured supporters that were strewn across the playing field, lies of supporters urinating and inflicting violence on the police officers on duty, the list goes on and on,

Four years later scumbag MacKenzie explained his actions, talking to a House of Commons National Heritage Select Committee, he said: “I regret Hillsborough. It was a fundamental mistake. The mistake was I believed what an MP said. It was a Tory MP. If he had not said it and the Chief Superintendent (David Duckenfield) had not agreed with it, we would not have gone with it.” 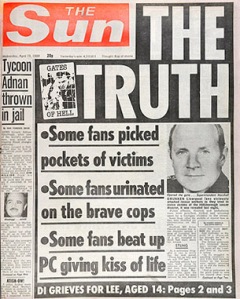 Boycott This Piece Of Shit Paper

Scumbag MacKenzie repudiated the apology in November 2006, saying he apologised because the newspaper’s owner, Rupert Murdoch, ordered him to. He said, “I was not sorry then and I’m not sorry now”. MacKenzie refused to apologise when appearing on the BBC’s topical Question Time on 11 January 2007. these are the actions of a complete cunt and a human being devout of any feelings or a conscience, in other words a cunt.

My hatred of this bastard rises each time I hear him speak or his name mentioned  on television, the revulsion I feel towards him cannot be put into words, and to boot he is a Thatcherite, well, enough said, if you cohort with Satan some of that shit must rub off. 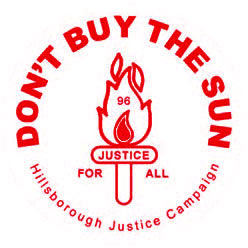 Below are the names of the unfortunate supporters who lost their lives that afternoon, 96 names and reasons why Kelvin MacKenzie must die and his rag be taken out of production.

As a football fan this could happen to me and others who follow their respective teams, we all respect the feelings of Liverpool FC and the family and friends of the deceased and hopefully that is shown each year at this time when we show our respects, please follow suit with the good people of Liverpool and boycott the Sun, and anytime you happen to come into contact with Scumbag MacKenzie please feel free to give the cunt a good kicking, then piss all over his bloody shit filled body as he writhes in pain, it’s not good enough but it’s a start.