Hot sticky night in Glasgow, ABC was the venue for yet another Fall event, I call it an event rather than a gig as recently you couldn’t call what The Fall were doing live as a gig in the traditional sense. We have now got used to Mark’s antics on stage, Knob twiddling, improvisation on drums using the microphone and messing with Eleni’s keyboard, and we also expect it, nay require it. 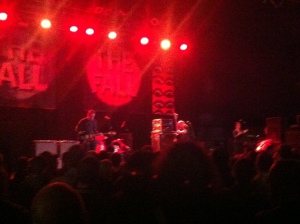 Rare… All Band Members On Stage

But I am racing on to the end before I’ve even started, The concert was started by Glasgow band Big Ned, never heard of them before so I watched with anticipation as the first few chords spewed from the sound system, very reminiscent of the Cramps, Alabama 3 type of thing, then the singing came in, I say singing, it was more talking intermingled with a bit of shouting, was entertaining enough for around three songs or so then it was wearing a bit thin, next…….

Second support act was the Rosy Crucifixion, again another new band for my ears, again the sound was very Cramp-esque, the three piece were OK, might give them another listen.

The lights dim, the cheers go up, camera’s and phones are held aloft in order to get the first pictures of Mark entering stage right, the backing track goes on, and on, and on, at least 5 to 6 minutes, then the band come on, and start the first song, a short time later enter Mark E. rapturous applause greets him he then proceeds to start his “live mixing” this entails him fucking about with the amps for the guitars, bass and keyboards, instead of enhancing the sound he does the exact opposite and completely fucks up the sound of the guitar, and the keyboards continued throughout the gig by either deafening us as the settings were all to pot or too low to even hear, now this would not have been a problem had we been entertained by the singers wit and repartee as we are normally used to but he then hides behind the guitar amps and sings most of the songs, appearing briefly at the front on occasion, the lyrics, that I have admired for many a year, were more incomprehensible than normal, making for an even more unenjoyable experience, this series of events carried on throughout the gig, he even had a sound man route the microphone through to behind the backdrop and had a secondary microphone handed in to the crowd and subjected us to some “wee girl” shout during Blindness “Fuck The State, Fuck the Government”, not what I paid for. The only saving grace was them doing Mr Pharmacist, not heard that in many a year, but to pay £23 for one decent song is not on, the band stormed off stage before returning to do The Theme From Sparta FC, Mark E. supplied minimal contribution to it leaving Eleni to complete the vocals, it was one of the best songs of the night but sadly the damage was already done. 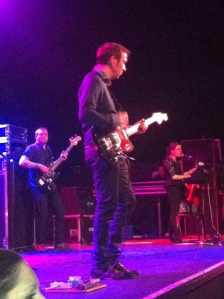 Mr Smith treated us all like mugs and I for one will seriously reconsider going to see them the next time, I would like to point out that the other band members were not to blame for this abysmal performance and as they stormed off they did seem perturbed at the nights proceedings, but again they just stormed off not even acknowledging the crowd which angered some of us, myself included.

As Fall fans we have all been disappointed by at least one or two performances throughout the years but for me this is the straw that broke the camels back, what was once Smith’s quirkiness has now developed into the downright rude, and to disrespect his loyal fans is shameful.